Last weekend was the Llani chartered market 734th birthday and to celebrate they made the biggest welsh cake ever, aiming to smash the world record. 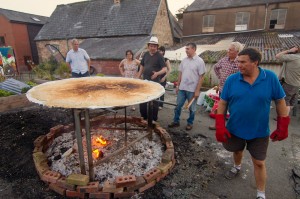 Chameleon Engineering made the 6 foot pan to cook it on, whilst Welsh Oak Frames donated the wood for the fire. The fire was prepared and kept going by the Llani scout explorer group in the Llani community food garden.   A large scaffolding tripod was made as a trivet shown here.  A whooping £50 worth of ingredients was donated by the Co-op and mixed up in giant mixing bowls.

Once cooked the pan was carried down Great Oak street, weighed and cut with pastry cutters to make ordinary sized welsh cakes for all to try.

When cooked it weighed a massive 26kgs. A world record – was made by a group of volunteers and then cut up and distributed in aid of Air Ambulance.

The last four were saved to put on eBay, buy one here.