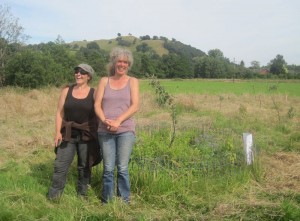 Kelly and Diane and the fruit tree guild

It was too hot this week for more than an hour’s work in the garden, where we are collectively scything and chopping the grasses and nettles growing between the orchard trees to mulch around them and reinforce them. The biggest threat currently is the local sheep who in the summer period have learned to ford the river and get in to the community field, Cae Bodfach. The idea that sheep eat grass is a bit of a misunderstanding, because given the choice they tend to go for anything else, especially tender herbs and juicy fruit tree leaves. So thanks to Richard and Dewi who chased out some 50 sheep the other day and hopefully have since managed to fence them out.

Lovely picture above on Kelly and Diane from Meifod, who popped by to see how the fruit tree guild they planted is developing.. and we talked about the possibilities of doing more of that kind of thing as it had worked so well.

We also met with Andy Lee at the Workhouse this week to discuss further plans for the Green Hub who have some resources still for further workshops and to continue the development of this another bio-diverse and productive community spaces. I am very keen to offer a series of Forest Garden workshops in the Autumn, and building some more plantings over the Autumn and Winter season.

Anyone interested in getting involved either pop along on Thursday mornings. 10 – 1.00 when we are usually there or get in touch directly via this website.