Dewi Morris from Llanfyllin and Steve Jones from Cwm Harry attended the town council meeting Llanfyllin last night to hopefully pave the way for a new community garden space in Llanfyllin that can also be part of Cwm Harry’s Get-Growing community growing initiative. We are keen to build a partnership between the Llanfyllin community, their Green Hub initiative, the Bodfach trust who have kindly donated the space as well as other local community groups. 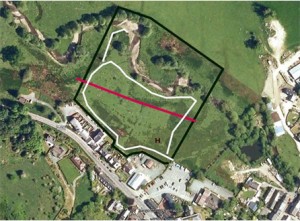 Two different Sector39 permaculture design course groups have worked on a design for this project, the first looking at landscape design options and component, the second looking at the barriers that have so far prevented any on the ground progress from happening.  The outline below is the product of the second study and is the core of what we submitted to the Town council last night. Our ideas were met with support and enthusiasm from the council and we have been invited to submit a phase one plan of the design to the council meeting next month. We were also offered an initial budget of £400 for plants, which we intend to match with resources fro the community and from Cwm Harry. 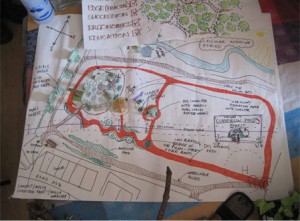 Two years ago, the site was offered to the Town Council for 20 years by a local landowner, Simon Bains.  The Town Council held a series of meetings with a group of interested representative local people, chaired by the owner of a local hotel.  The group came up with a plan, which included a forest garden, gabion amphitheatre, picnic benches, and a young people’s adventure play area.  The cost of the plans came up to £220k, and the Parish Council felt that this was too expensive.

Steve Jones used the site on a Permaculture Design Course, which came up with an alternative sketch  plan, which incorporated the forest garden, a fruit orchard, and sitting area.

The site extends to approximately 10 hectares and straddles the river Cain , with the North East side planted with young trees.  An artificial otter halt has been built on this side of the river.  This side is relatively inaccessible.

To the South East of the site there is a SUDS scheme, which was built by the environment agency, with the help of four local volunteers.  It includes a boardwalk, with benches and interpretation panels, and is fully accessible.  It is separated from the rest of the site by a hawthorn and blackthorn hedge, which was planted when the SUDS scheme was carried out.

To the South some fruit trees have been planted by the local school (can’t remember whether it was primary or secondary) on a relatively dry piece of land.  They were acquired by Dewi Morris, who has been heavily involved in the project.

An informal path runs around the edge of the site, which is used by local dog walkers.  A waste bin for litter and dog waste is situated by the entrance gate.

The river is fast flowing and meanders through the site.  There are the remains of an oxbow lake adjacent to the river.  The river has alder trees along part of its banks.

There are electricity lines and pylons across the site, and the helicopter ambulance has a landing point near the entrance.

Test pits have been dug to identify the soil and strata  by Steve Jones.  This identified that there was an area in the centre of the site, which was drier.

The land is almost entirely grassland, which is cut once a year by a local farmer, who takes the cut for animal feed/bedding.

A large Spar supermarket is planned on land adjacent to the site.  There is car parking for some cars by the entrance to the site.

The Community consists of about 1,800 people.  It has a good socio-economic mix, with a thriving primary and secondary school.  The community is tightly knit, with a strong alternative feel.  Many incomers came to the town in the 60s and 70s.  It is a lively town, with a lot of musical events, and strong art/craft interest.

The library acts as a good hub for the arts (more about the detail here),   The High School is an Eco school, and within the grounds there are small allotment plots and micro community orchards.  The orchards have a limited amount of community involvement.  Steve Jones has taught a term of Permaculture at the High School.

The Workhouse is a centre on the outskirts of Llanfyllin.  It is a grade II listed building used as a music and festival venue, with a bar and craft workshops.  The venue splits opinion within the community, with some seeing it as a negative influence on the town, while others see it as a valuable community resource to be developed.

Over the past year, a resident, Andy Lee, has been keen to link together different areas in the community to become a green hub.  To this end he has raised £11k and is keen to develop a joint vision.

When asked what his overall vision was, Dewi wanted to see a ‘wonderful overall space’,  This included:

Steve had a more a more pragmatic approach, and wanted to see a community garden, starting in a small but very visible way with an orchard area on the drier land in the centre of the site, but designating areas of the site for future potential growing initiatives.  He sees the initial planting as happening in the near future.

The resources available at present include:

It is intended that the land produces fruit and vegetables for the local community for immediate consumption, and to make into preserves.  In addition, willow and other fast growing trees could be used for craft workers and for biomass.

In addition, this could be a community space, where people meet and socialise, perhaps while tending to crops.

It will also be necessary to accommodate the farmer who harvests the grass, and dog walkers.

1.        Identify who will be interested within the community.  At present the is a  group of people who have some commitment, but if the project is to work, this needs to grow.

Possible options for engaging with the community:

a.        local meetings to discuss ideas, and what people are prepared to contribute.  This may interest some local people.  This could be a drop in format, with planning for real to build a feeling of empowerment.

b.        questionnaire, which could be distributed to households.  This would require quite a lot of work, but may identify more people who eg have craft or cooking skills.  It would also give a map of skills and commitment of the community.

c.        Start by ‘doing something’ eg tree planting.  This could be advertised, with local volunteers carrying out the work.  There are however dangers that the community may feel that they have not been involved and may be reluctant to commit and disempowered.

d.        Ad hoc support is usually easy to encourage and find.  More challenging will be a more organised structure to ensure that the project develops and evolves, and that the site is maintained appropriately.

e.        A blitz approach could be used by a range of social media, leaflets, talks etc. to get a level of enthusiasm.  This would take quite a lot of resources, which may be beyond the existing group.

f.        Involving the schools may be a useful place to get enthusiastic energy, though this may be only useful for one-off events such as tree planting, rather than ongoing maintenance.

Sit down with Dewi before you meet with Town Council and agree a plan of action.  This will be important if you are to come across as focussed with a common goal.

Start with the fruit trees, where you want to put them and why.  Describe the issues re mowing.  Reassure them over the amount of maintenance that will be required.

Talk about having a big event to plant the trees and engage with the local community.  Ask if there might be a chance of some funding for holding this event.  Invite them to be involved if they want to be.

Move on to your wider vision for the project.  Acknowledge that the earlier design was too expensive for the Council, but that there are elements such as the forest garden/allotments that could be developed relatively inexpensively.  Mention existing uses such as dog walking and helicopter landing to assure the Council that existing users can be accommodated.

Say how you see the project being managed – this is time for mentioning the Green Hub and how that could contribute to the strategic direction.  Assure the Council that there will be a robust governance structure for the project.  Ask the Town Council for their opinions and how they see their role.

Promise to keep the Council fully briefed as to what is going on.  Ask for a point of contact, so that the Council can be informed about any actions/meetings

Start with another tree planting event.

Plan carefully for this.  The aim of this event is not just to plant the trees, but to grow awareness and engage local people.  At this stage it is about identifying interested individuals.

A media campaign will be important in order to advertise the event, and parish council permission and approval should be sought at an early planning stage.  Perhaps a grant could be obtained to allow for a large gazebo to be hired, and refreshments provided.  Refreshments could include home cooked/baked produce eg apple cakes, to show what could be done with the produce.  Events like face painting, apple bobbing or making dream catchers could be included to encourage a good attendance.  It will be important here to involve local groups, eg WI, who could be encouraged to attend if they see it as a fundraiser for their group.

The local history group could be asked to research the history of the area and invited to put up a display.  They could also be asked if they would record the recollections of the site by older people.

The local schools could be asked to get involved – perhaps with pictures of their vision for the site or a painting/craft competition.  This could bring in parents as well as the young people.

Local craftspeople could be asked to demonstrate their crafts.

A questionnaire could be designed for the event to gauge interest in the site, and contact details if and how attendees want to be further involved.

A site design could be put up with workable suggestions.  Attendees could vote for the ideas they liked best.

It will be important to follow up this event fairly quickly so as not to lose momentum in the project.

While small tasks could be carried out quickly, it will be important to have some sort of formal structure for a steering group, if funding is needed.  A few quick wins will be needed here if the group is not to get bogged down in constitutions!  An external  facilitator here may be useful to bed down a workable agreed permaculture vision for the site, which can then be shared with the local community.

Liaison with the Parish Council, and possible the workshop management committee will be important here, as will the idea of a Green Hub – could the steering group cover a wider area than just the site?  Lines of communication and decision making need to be clear – who makes the decisions, where and when?

3.        Gauge interest in projects from the local community

Try to involve those groups when that part of the project is being developed and built/planted.  Management plans need to be in place so volunteers have a clear idea of what is planned and what their role is in bringing it to fruition.  A gradual implementation of the vision will probably be more appropriate for this site.

It will be important to monitor progress of the project on a regular basis.  This monitoring should be reported back to the parish council to ensure that they have early warning of any problems