We have said ourselves a few times over that a community garden doesn’t really take off until the community take some ownership of it. Well that certainly happened over the weekend! 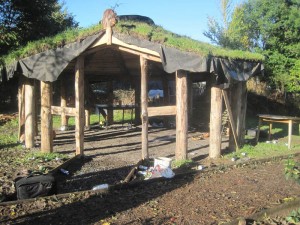 Aside from a few obvious infringements we are actually pleased that a bunch of presumably local youths spotted the potential of the wonderful community garden space as somewhere to have fun and have a bit of a seasonal blast for Halloween/ Bonfire night. People are really welcome to make this space their own and to use it for community functions. 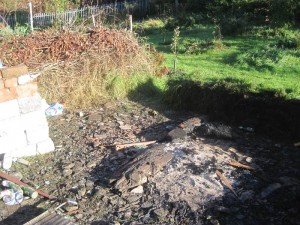 More than firewood got burnt up, as a valuable had made door was used to keep the fire-pit ablaze.

So we came in on Monday morning to the realisation that there had been a very lively party in the Roundhouse over the weekend, with evidence all over of a large amount of fun having been had. Were it not for the fact that there was cans and bottle strewn about the place, tyre tracks in the field and that a valuable hand made door had been burned as firewood we wouldn’t have minded. 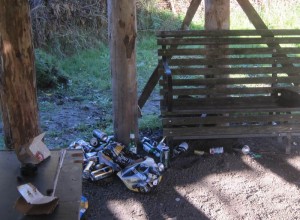 Guess we need a recycling facility.. cans and bottles left after the party

So it turns out that the neighbours were pretty upset as there had been thumping music all weekend and an impromptu firework display at 6 am on Sunday morning. The community police officer also said they received complaints during the night..

Due consideration to the wider community and respect for a community space are of course the bottom line for using the space here, but people really are welcome if they can stay within obvious guidelines.

Remaking the door and window frames that were burned will be a future workshop.. so if anyone out there is feeling a pang of guilt then please consider attending.